Daegu is a metropolitan city with a population of 2.5 million and a central city in the Yeongnam area. It is a historic town that has inherited the glorious culture of old Silla and Gaya.
Enjoy the excitement of dynamic excursions such as luxury tourism, food tour, and healing experience in Daegu, a tourist city where many cultural heritages and traditions and cultures are available for diverse cultural experiences.

Daegu is formed as a branch in the middle of Palgongsan and Biseulsan, and the city is developed around Kumho River and Sincheon.The Nakdonggang River flows around Daegu's western border.

It is a bustling terrain with the highest temperature in Korea. Daegu planted many trees in the streets to overcome the dry and hot weather. It is an environmentally friendly, clean and livable city selected as the Solar City by the International Energy Agency (IEA) along with the world's leading environmental cities.

Daegu is 300km away from Seoul and 120km away from Busan. It is the hub of traffic for trains and roads all over the country. It is the center of political economy, administration, transportation and culture of Yeongnam. 2002 FIFA World Cup 2003 Summer Universiade Competition, 2011 World Championships in Athletics held the world's most competitive city.

Daegu is developing the textile and fashion industry through automobile parts business and high added value, and fostering green energy and IT convergence industry as a leading strategic industry. We are preparing for a bigger future with advanced medical complex and Daegu Technopolis.

If you come to Daegu, just gather places you have to go

It is a representative course that selected 30 tourism resources of Daegu as a representative tourist resource. It is composed of Eworld / 83 tower, modern alley, Dongsungro, Palgongsan sky garden / cable car, and Donghwasa Temple. It is the center of the tourist area which is always open without any procedures such as reservations or reservations, and it is easily accessible by public transportation.

Donghwasa Temple
The world's largest stone Buddha with a height of 30m and
a circumference of 16.5m
+ 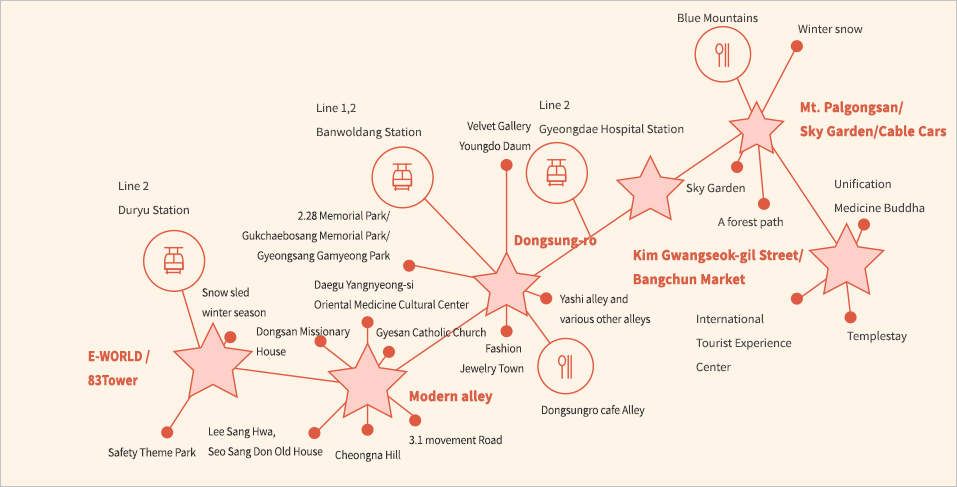 n the middle of a colorful city center, an old story comes to mind. Kim Gwang-seok's song flows through the alleys, and when you shout at the cafe, E-World's brilliant fire continues late at night. The city overflows with a handful of albums, and like a black and white photograph, the city welcomes warm-hearted people with warm and friendly stories. 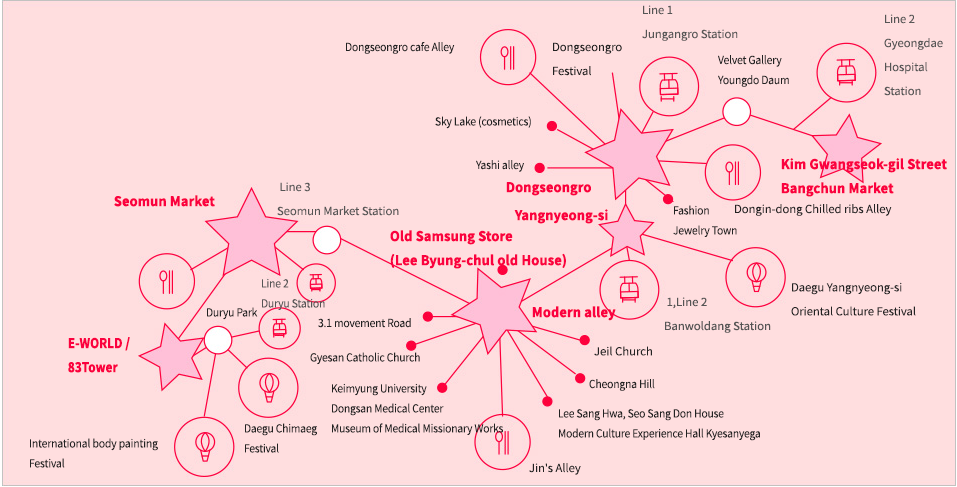 Can I travel like a Daegu in Daegu? have. It is the 'so good' course to view the sights of Su-sung and Ga-chung, and it is the proud stadium of the citizens, choosing only the sights such as the Grand Chamber of Commerce, Suseongmot, Spa Valley and Hillcrest, It is a course to go. Besides, you can enjoy eating pleasure in the nation's biggest restaurant street. '

NokdongSeowon Confucian Academy
At the time of the Japanese invasion of Imjin,
Kato Kiyomasa
+ 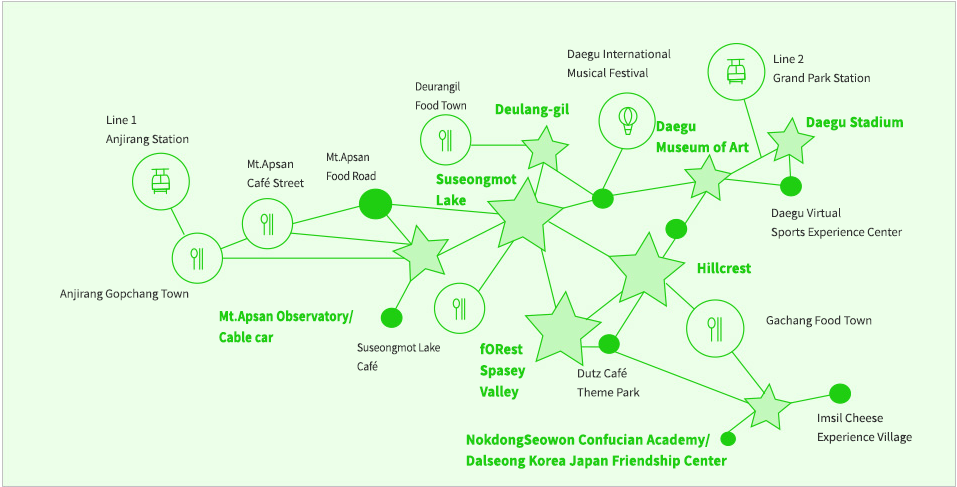 Daegu has more complex metropolitan images than travel growers. However, there are a lot of places to enjoy leisure time just outside the city center. A bike path along the Nakdong River and a fresh air beneath the chest can be found in the Arboretum, which is enough to appease the daily wear and tired minds and minds. Is it that? Biseulsan is a masterpiece of nature made in the Mesozoic period. Above all, it is appealing that all these places are gathered in a milky way not far from the city. The Gangseo Gangsan lanbo course, where you can enjoy Daegu's famous places leisurely, meets various needs of travelers.

Korean Rosebay Habitat of Mt. Biseulsan
Every year in April,
the summit of Mt. Bislessan
+

The ARC
Gangjeong-golyeongbo has wave, reed, plowing and harmony of life
+

Mabijung Mural village
A painting of colors
and complexions
+

DodongSeowon Confucian Academy
One of the five nations
in our country
+ 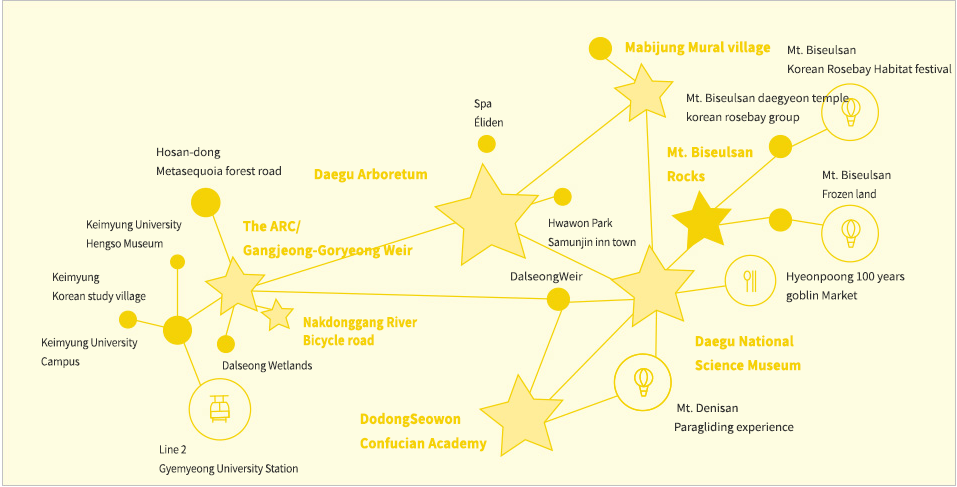 Palgongsan, which is surrounded by Daegu like a folding screen, is a famous mountain where the citizens boast about. It is a shelter where you can rest your tired shoulders in a lush green forest stretched from 1,193 meters above sea level. The story of many stories and wisdom that remains of historical and cultural wisdom has been fulfilled by General Kim Yusin of Silla who unified his dream of reunification. Achievement is at stake. Every time I climb up on Kadaba with my hope, I have a delightful time of chest banging while walking through the sky gardens.

Gatbawi Rock
Sit at the top of
the 850m sea level
+ 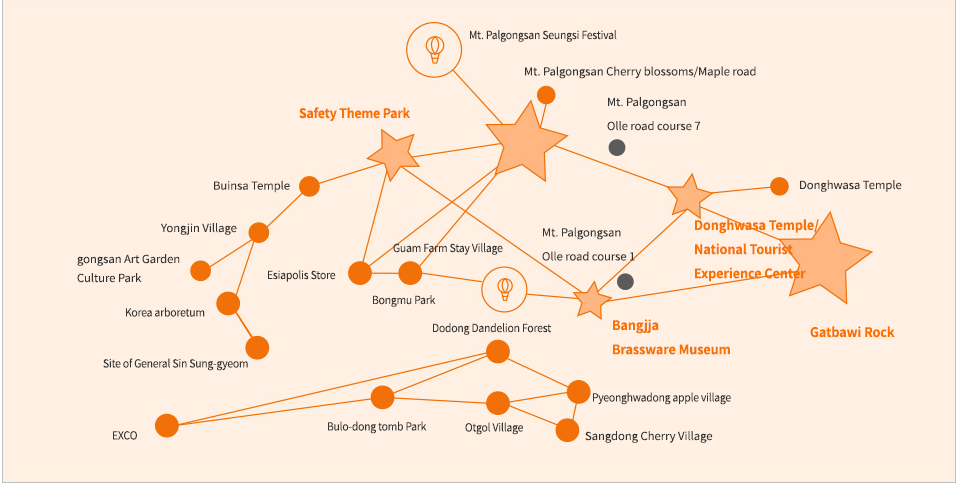